Today was my 10th and final radiation treatment which means I'm OFFICIALLY done with all of my cancer treatment!  I think this calls fore more champagne! 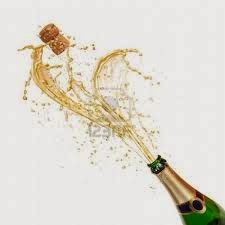 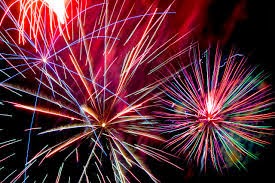 Overall, my 10 radiation treatments were pretty easy.  There were a few days that they had trouble lining me up properly with the radiation machine, but most treatments were super quick with no issues. After they put the mask on me, they take x-rays to make sure I'm lined up right - they literally measure to the millimeter and a few times had to come in a scoot me around on the table or have me wiggle my face around in the mask.  But even on those days, I was in and out of the office in under 30 minutes.

As for side effects, I'm extremely tired.  It's hard to put into words how tired I am.  I'm exhausted all day long.  The only other side effect is a sore throat.  The left side of my esophagus is really raw, which is painful.  I'm currently eating a bowl of ice cream which is helping :)

The radiation technicians sent me home with a little stuffed bear to congratulate me… and they gave me the mask to keep.  I personally don't want the mask, but my dad does so he's getting in early Christmas present :)

So… where do we go from here?  I follow up with the radiation oncologist on December 30 - he'll just check in to make sure my radiation side effects are improving (the side effects usually last 4-6 weeks).  Then I meet with my regular oncologist in late January.  She'll do a physical exam and unless she sees a reason to do it sooner, I won't have to have another PET scan until April.  In April, I'll have a full PET scan to check to see if I've relapsed (which I won't!).

So now that I'm all done with treatment it's time to CELEBRATE!  Josh and I would like to celebrate with all of our amazing friends and family who have been there for us during this stupid cancer.  I know December is a tough time to get people together, so we're going to wait until January and then throw a big PAR-TAY!  More to come!

I had a tough reality check this weekend: I miss my hair.

For the first time in months, I got dressed up and headed out for dinner and drinks in downtown Indianapolis with a group of friends.  Most of the time I wear a baseball hat or a comfy slouch cap since I'm not comfortable being out in public without a hat.  But for "special occasions" I wear this fedora:

All night I found myself admiring all my girl friends and their long beautiful hair, full eyebrows, and luscious eye lashes (all things I no longer have) - and their ability to leave the house without a hat.  My hair loss had never really bothered me until then.  I think the reason it hit me so hard that night is because my hair isn't really growing back in yet.  I know it will, but guess I didn't think it would take this long (my darn optimism got me again!).  Plus I'm sick of hats.

I shed one or two tears when I got home that night and decided I needed to do something about it.  I haven't decided yet what that "something"is… In all honesty, I may just end up shaving my head and starting from scratch.  But I'm considering a short pixie style hair cut.  Hey, Jennifer Lawrence did it and she doesn't even have cancer!

Here are a few shots of how my hair looks now:


What's weird is I think it actually looks better in pictures than in real life.  Anyway, I'm hoping to get in with my hairstylist soon and see what she recommends.  I'm 99% certain I will make some sort of change very soon.  I think that if I leave it the way it is, it'll only get more awkward looking as the bald spots fill in.  If I leave it alone, I'm afraid it will be several months before it's "filled in" and I'm comfortable going in public without a head covering of some sort.  And I'm impatient.

I'm taking suggestions, so if you have a hair style idea that might work, please share!  And of course you'll all be the first to see what I end up doing. 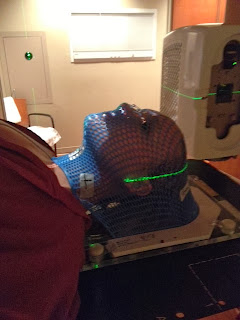 Today was my second (of 10) radiation treatments.  Holy moly, this time was so much better.  I was in and out in less than 15 minutes!

Again, I got there and changed into the sexy gown (here's a reminder from yesterday):

I waited for about 4 seconds in the waiting room before they called me back - I really hope it's quicker next time :)  I hopped up on the table, they put the mask on me, and less than 5 minutes later I was done!  For some reason the mask felt tighter this time.  If it was that tight yesterday when I was in it for 30 minutes, I may have died.

Here's the only waffle-face I was left with this time: 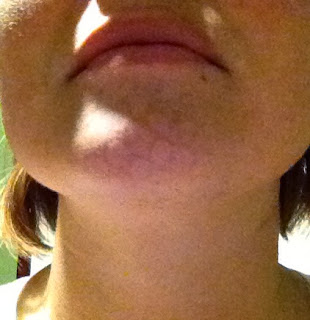 That's it!  Wham, bam, thank ya ma'am.  Hope the next 8 are as easy!  Oh by the way, I woke up this morning with a tiny bit of a sore throat.  Could just be a coincidence… not sure if it has to do with the radiation.  Feels fine now.

I had my first radiation treatment this afternoon.  It was weird and uncomfortable, but I survived!

The doctor explained what the hold-up was with my insurance (as I complained about yesterday).  Apparently the placement of my tumors - well, where they used to be - was awkward.  It took a little extra planning and they decided to use a different machine.  This machine is used for prostate cancer, brain cancer, and others… but not typically Hodgkin's Lymphoma.  The machine will only "zap" the places that need it; if they used the original machine, it would treat a larger area than needed.  So the insurance company needed an explanation from them as to why they needed to use this other machine.  Anyway, blah blah blah, insurance approved it and here we are!

I got to the radiologist's office and changed into my awesome gown (it only covers my top half): 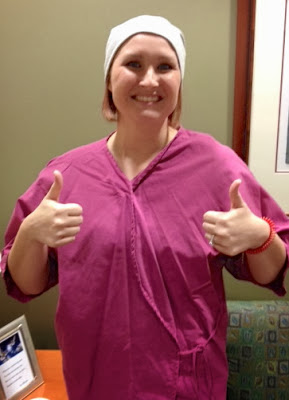 Right on time, they came and got me and took me into the radiation room and had me lay on the table: 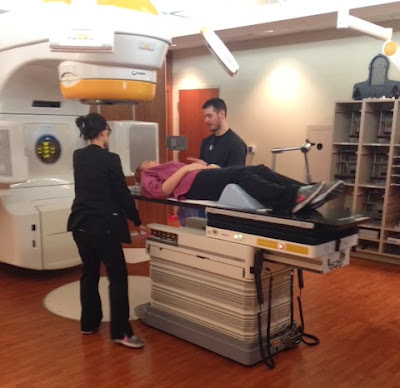 The technicians get me all lined up on the table: 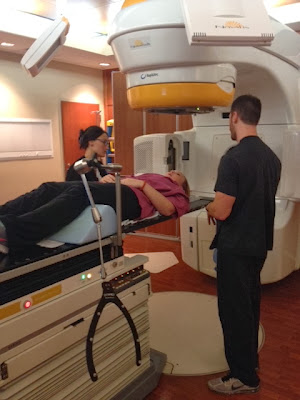 And the put on the dreaded mask: 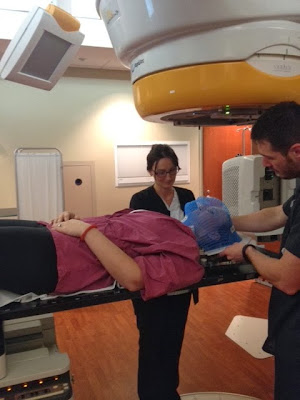 At this point, the mask is attached to the table and I cannot move at all.  For the next several minutes, they continue lining me up with the machine: 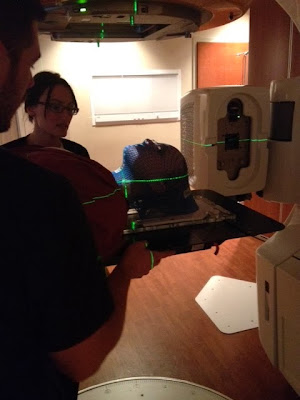 Now that I'm in place (the green lines above are what they use as reference points), they take an X-ray and then get with my Radiation Oncologist to make sure everything is lined up as planned.  One technician comes in and scoots my body one way.  The other technician comes in and scoots my body the other way.  Then they readjust the tape pieces on the mask and make new permanent marks on the mask.  Then I have to lay there and wait for the doctor's approval.

Finally the technician came over the intercom and told me they were approved to start the radiation.  The treatment itself only took about 2 minutes. 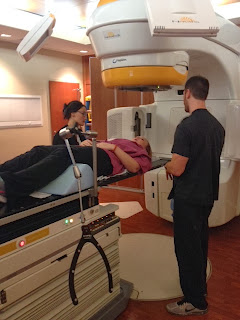 The yellow part of the machine in the picture above moves from one side of my head to the other and then back again.  And that was it.  I literally felt nothing.

The technicians came back in and freed me from that awful mask.  I was in the mask this time for almost 30 awful minutes.  All of my other treatments will be less than 15 minutes.

When I was all done, I looked like a turtle: 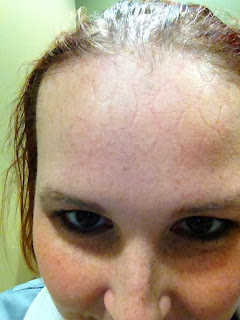 I got my schedule for the rest of my treatments.  I'll go every day (Monday through Friday) for 9 more treatments.  The doctor seems confident that I'll be able to to be done two days before Thanksgiving.  Woo hoo!!

Doc says to put a good lotion on the area every day after treatment to help with any skin issues.  He said I may have a sore throat next week after I have a few more treatments.  Fatigue will be the only other side effect but he says it will likely be minimal since I'm having a shorter treatment plan.  I feel fine tonight - no different than I did before treatment!

I'm beginning to wonder if I'll ever start radiation!  I thought I'd be almost done with radiation at this point, but instead I haven't even started!

I met with the Radiation Oncologist on Monday, October 28.  I had my planning appointment with the radiation technicians on Wednesday, October 30.

Yesterday, they called and said the approval STILL wasn't in from the insurance company and they needed to reschedule me for Wednesday, November 13.  I have appointments for work on Wednesday morning that I cannot reschedule (nor should I have to!), so they were going to try to "squeeze me in" for Wednesday afternoon.  They called back yesterday and said they were going to try to get the treatment approved this morning and put me back on the schedule for today.

So then this morning, they call and say they won't be able to get treatment approved in time for my appointment today.  So now I'm waiting for them to call me back after my insurance has approved my treatment to schedule me.  I honestly have no idea when that will be.  Tomorrow?  Next week?  Who knows?!

I'm so frustrated.  I'm ready to get this last leg of my treatment started so I can be complete done with treatment and move on with my life!

UPDATE:
I got the call - my insurance has FINALLY approved my radiation treatment!  I'll be starting tomorrow (November 13) at 4pm.  If all goes as planned, I'll be finished with treatment two days before Thanksgiving.  Will be a year to be extra thankful!