So, as soon as Josh and I knew when my last chemo and radiation treatments would be, we booked a long weekend trip in Florida.  We thought it would be a nice way to celebrate the completion of my treatment and a nice, romantic weekend for the two of us! This past weekend was that trip and it was wonderful!  We got to leave cold, snowy Indiana and spent one day in Orlando visiting Universal Studios and Islands of Adventure, then spent the rest of the weekend at Clearwater Beach.  Here are some pictures from the trip: 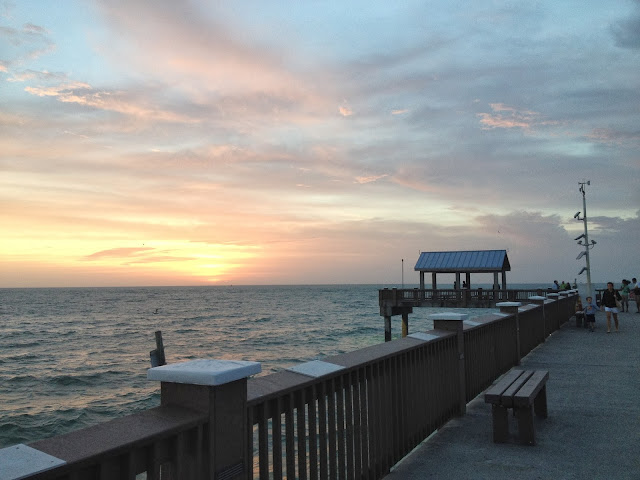 The trip was so much fun!  Besides Universal Studios on Friday, we didn't really do much - which was perfect!  I felt really good all weekend, just a little tired by the end of each day.  And I was in bed and sound asleep at 8:30 on Monday night after we got home - worn out!  We were so thankful to have been able to take this little trip, it was very much needed!

About 4 weeks after my last chemo I developed an itchy leg.  I assumed it was dry skin, slathered lotion on, and mostly forgot about it.  The itch got worse and then moved to the other leg.  It was a dee, intense itch that couldn't be satisfied.  I scratched so hard I had bruises all over my legs and eventually broke the skin and bled.  No amount of lotion seemed to help.

And then it moved to my stomach and chest and I thought I was going to lose my mind.  The oncology nurses said to try Benadryl (both oral and topical), Cortizone cream, and cold compresses.  Nothing really seemed to help.  My oncologist said it could be stress related (people who are in remission are often stressed about recurrence - I'm no exception) and had me start taking Zyrtec (an antihistamine) and give it another week or so.  Still no relief.

It's been about a month and a half since the itching started.  I'm all bruised up and the itching has been keeping me up at night.  I literally got about 3 hours of sleep last night it was so bad.  My oncologist recommended I see a dermatologist.  I couldn't find a dermatologist in the city that could see me in less than 4 weeks, so I made an appointment with my General Practitioner.

I saw my GP today and she's not really sure what's going on either.  She thinks it's likely severe dry skin that's gotten worse due to chemo and the cold, dry winter air.  She ordered blood work to test my thyroid and liver enzyme levels.  There's a super slim chance there could be a problem with my liver (which causes itchy skin), but she says it's unlikely.  Theoretically I could have liver damage due to the plethora of drugs I've taken lately (pain killers in particular can be hard on your liver).  Again, it's unlikely but she's testing it just to rule it out.  I already have an under active thyroid which I take medication for.  An under active thyroid can cause dry skin, so if my dose is too low on my current medication it could make my skin even more dry.  So she's testing that too to see if we need to adjust my dose.

She recommended a hard core skin cream called Cetaphyl.  It comes in a tub and is really thick.  I used it earlier and I really like the way it feels - it's nice and thick and soothing, but not too greasy.  She says to slather that on at least once a day and see how that does.

Blood work will be back in a couple of days.  If it doesn't give us any answers, the doc is going to have her nurse call a dermatologist directly and try to squeeze me in as soon as possible.

In the mean time, I've been prescribed Atarax, which is an antihistamine that's often prescribed for itching.  It's also a sedative, so it'll help me sleep too :)

So that's where we're at with the mystery itch.  Hopefully it is just dry skin and I can get it under control soon because it's really driving me crazy!

Port's Out, Hair's Cut, And Other Some Other Stuff

I haven't had too much to update on lately, so I'll throw a handful of updates in this post!

Port Removal
I had my port removed yesterday!  It seemed like a symbolic end to all this, so it was a great day! 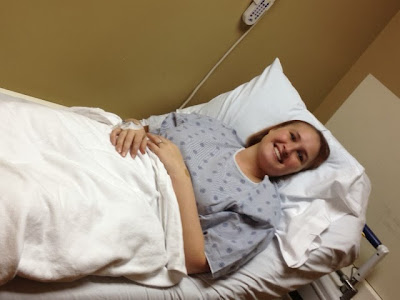 My surgeon originally told me I would not be under full anesthesia - just a local anesthetic with light sedation.  I was quite nervous about this… being awake during the procedure… listening to everything that's going on.  I was worried about hearing gross slurping noises as the port was pulled from my body.  Ick.  Thankfully my surgeon changed her mind (I didn't ask why - didn't want her to change her mind back!) and I ended up under full anesthetic and was sound asleep for the removal!

Everything went very well.  It was a quick procedure and I was home in just a few hours. The only issue was getting the IV placed.  The poor nurse had to try three times (in three different locations) before finally getting a vein.  She was able to place it in the top of my right hand, which was not pleasant.  The anesthesia going into the IV in my hand burned really bad, but I was sound asleep in seconds so no big deal :)  I'm left with a pretty ugly bruise on my hand (it's actually worse than this picture shows, but I bruise really easily, so I'm not surprised!) 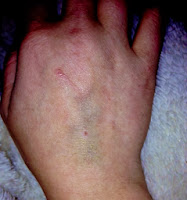 I was pretty sore at the incision site yesterday.  I took plenty of pain meds and slept all day yesterday - today I feel good!  It's a tiny bit sore still, but really not bad.  This is what it looks like now (I can take those steri-strips off in a few days): 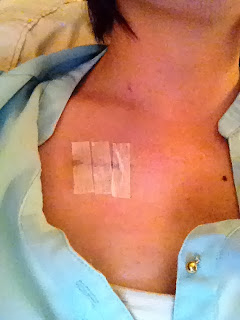 They went through the same incision as when they placed the port, so I'll just have one scar on my chest.  I choose to think of it as a battle scar.

Hair Update
Today I had the big hair appointment!  If you recall this post, I unintentionally threw myself a little pity party about being partly bald.  I didn't mean to sound like a Debbie Downer, but I was frustrated!  I was super duper close to shaving my head and starting from scratch, but luckily I was talked out of doing that!  My second choice was to get a short pixie cut, but after meeting my stylist today, she said my hair was too thin for a pixie to look good.  So after all that, she did a tiny little trim to shape it up a little bit and colored it a nice dark auburn color (which I love!).

The dark color seemed to help make my hair look a little fuller, which was promising.  My stylist also recommended this stuff:

I was skeptical, but decided to give it a try and it actually works pretty well!  It's like a powder you can put onto the thin spots, but it's actually little fibers that stand up and fill in with your existing hair.  It's not something I'll use every day, but for those days I don't want to wear a hat, I think it looks pretty decent - it'll do for now!  Here are some before a after pictures (the "after" pics are with Toppik in my hair:

Radiation Side Effects
My last radiation treatment was 9 days ago and up until a couple of days ago I had a really sore throat as a side effect.  Radiation was given to my left side of my neck, and that side of my throat was really sore for about a week.  It felt really raw, it's hard to explain… it was painful to swallow and even to yawn and my voice was a little scratchy for awhile.  Luckily that's all gone now and I just have a tiny bit of a sore throat as a result of being intubated during yesterday's surgery.

The fatigue as a result of radiation is mostly at bay.  Sleeping all day yesterday after surgery helped I think :)  I feel a little tired today, but nothing like the fatigue I felt last week.

Mystery Ailment
So I'm dealing with a mystery ailment that my oncologists can't figure out.  About four weeks after my last chemo treatment, the outside of my right thigh began itching really bad.  I figured it was just from dry skin (chemo is horrible to your skin), so I slathered it with lotion and didn't think much of it.  A week or so went by and it only got worse.  Then it started on the left leg.  Then it started on my stomach.  I tried really, really hard not to scratch it, but I couldn't help myself.  Josh said he even caught me scratching in my sleep.  It's an itch that can't seem to be satisfied.  I've scratched so hard I've bled and given myself bruises.  Here's what my right thigh looks like today (sorry it's kind of gross): 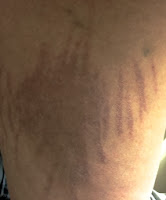 The oncology nurses had me try Benadryl (both oral and topical), Cortizone, ice packs, and Zyrtec (allergy medicine).  Nothing helped and the nurses and my doctor are stumped.  The have just referred me to see a dermatologist to try to figure it out.  I will call them tomorrow morning to set up an appointment.  I'm on an oral steroid now to help with the itching, which is helping some, but not completely.  Will keep you updated on that!

I think that's about it for now!  We're ONE week away from our Florida vacation and we're SO excited!  Until next time!