I've just recently gotten home from Chemo treatment #1.  Apparently they were short a nurse and a pharmacist (that fills the chemo prescriptions), so we ended up being at the office from 9:30 a.m. until about 4:15 p.m.  Whew!  The nurses kept apologizing and said it normally won't take nearly that long - I hope they're right!

I feel fine now.  I have a slight headache, but the nurse said that's normal.  I get migraines, so apparently I'll be more susceptible to getting headaches throughout treatment :(  But my prescription migraine medicine is fine to take, so hopefully it will at least be manageable.

Ok, so here's how the day went:

We woke up around 8:00 a.m.  I put on the shirt my sweet Mother-In-Law got me (purple is the color for Hodgkin's Lymphoma): 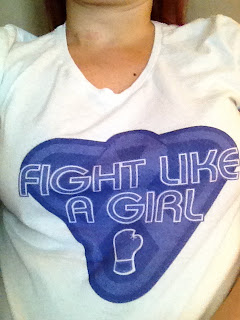 Here's what my port looked like first thing this morning (it looks red because I just took the bandaid off): 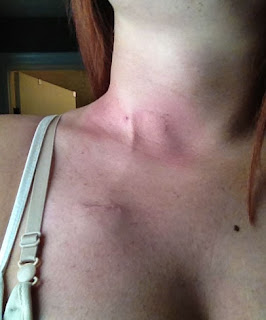 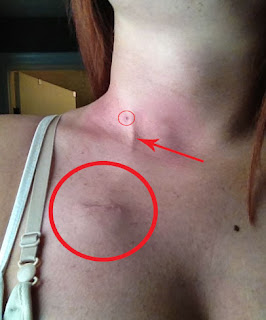 The large circle is where the actual port is - you can see it raised from my skin slightly.  The arrow points to the internal tube that connects the port to a vein in my neck.  The small circle just highlights the small incision they made to attach the tube to the vein.

Around 8:30 I put the numbing cream over the port site.  They have you cover it up with saran wrap to keep it from getting on your clothes.  Here's a picture: 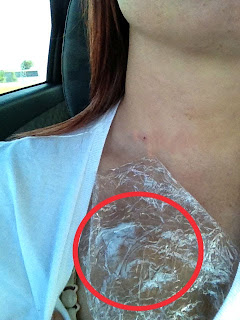 I've circled where the port is (same circle as the previous picture), you can see a little of the white numbing cream through the saran wrap.

Here we are on the way to our appointment around 9:00: 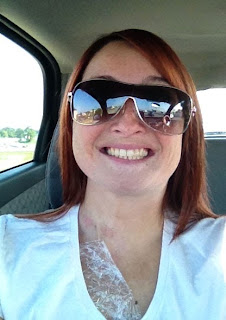 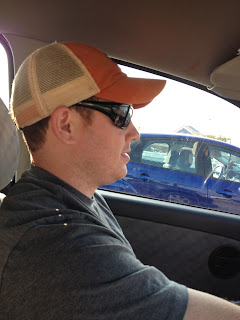 Apparently the oncologist's office was really backed up this morning.  It was almost an hour and a half before I even saw my doctor.  But it was all really good news!  My heart test was above normal (anything about 50% is good - I was 60%!).  My lung test came back showing 107% lung function!  My PET scan showed no indication of cancer in any other area of my body (although apparently my tongue had some highlights on it, but she said it was probably just because I moved it too much before the scan - read my previous post about the PET scan here - it's something we'll look for on the next scan).  The bone marrow biopsy was negative.  So the OFFICIAL diagnosis is Hodgkin's Lymphoma Stage I - woo!

And here's the best news of the day:  I may only need 4 treatments of chemo and a month of radiation!  They had originally said I would need at least 6, but since my tests were all so favorable, they're going to start with 4 and then do another PET scan.  If that scan shows the cancer is gone, we can stop the chemo!  So 4 treatments is actually considered 2 rounds/cycles - each cycle is 2 treatments, if that makes sense.  So I'll hopefully only need 2 cycles, which is 4 separate treatments.

The doc measured the enlarged area of my neck (you can see it here - on my left): 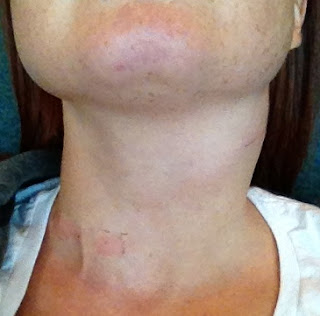 It currently measures 8.5 cm by 4.4 cm.  We'll be watching this over the next several treatments.  The doc said by the second or third treatment it should be completely back to normal size!

Ok, so after all this good news from the doctor, they sent me out to the infusion room.  I didn't take a picture of the infusion room because it was full of people and I didn't want to be known as the "weird one."  I was hoping to find a picture online of the room, but didn't have any luck.  Here's another cancer center's infusion room that's similar to mine:

There are several big comfy recliners with "guest" chairs next to them.  Lots of windows and lots of sunlight!

We waited almost an hour before they even got me "plugged in."  It was really cold in the infusion room, so I put on my new Mario Lemieux sweatshirt that my dad got me for my birthday (all proceeds go to the Mario Lemieux Foundation which supports Leukemia and Lymphoma research): 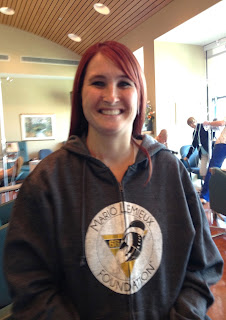 Finally at noon, they got my first few prescriptions filled at the pharmacy and plugged me in!  Here's what it looks like once the nurse has accessed my port: 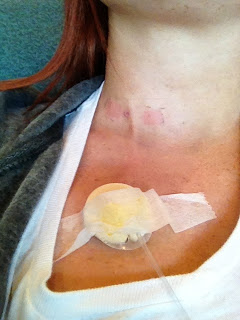 I was getting really cold and snuggled up with my new quilt: 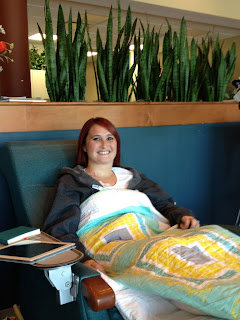 In case you missed yesterday's post, my friend Tisha made me this quilt to bring with me to chemo.  Here she is with the quilt: 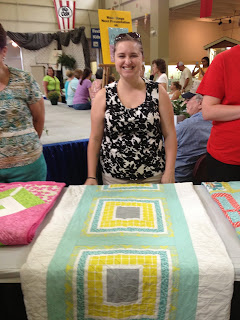 At 2:00 p.m. they started my first chemo drug.  I'll have 4 separate chemo drugs each time, which is called ABVD (each letter representing a different drug).  I plan to write a more detailed post about ABVD later this week (hopefully!), so check back for that.

The first chemo drug is the "D" - Dexamethasone.  This is a clear liquid that is given by IV drip, so basically they hang a bag and let it slowly go in.  It took about an hour and 45 minutes.  While we were waiting, Josh decided to try to take my picture...  We were bored. 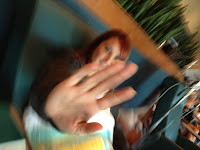 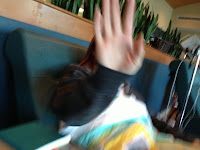 Here's an acceptable one :) 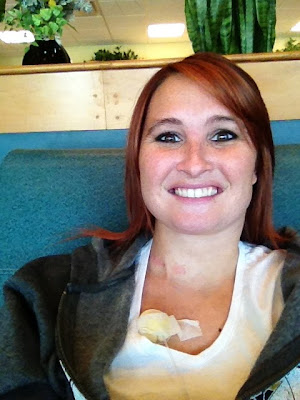 During this time, I met another woman with Hodgkin's Lymphoma (she noticed my sweatshirt and we started chatting).  Her name is Sandy and she's incredibly sweet!  She's much older than I am (probably in her 60's) and she's Stage IV and on her 6th treatment (she'll have 12 total).  She gave me some good information on what to expect along the way.  Aside from my next treatment which will be moved due to Labor Day, she and I should be on the same Monday schedule, so I'm happy I'll get to see her again!

Here's some more good news - Sandy still has most of her hair and she and the chemo nurse both said I may not lose all of mine!  They said I'll definitely thin out, but I have a smaller dose and will (hopefully) only need 4 treatments, so I may not be bald after all!  Of course everyone's different, so I'll have to see how things go in the next 2-3 weeks.  Crossing my fingers!

At 3:45 p.m. they started the next chemo drug.  Each of the next three are done by "pushing" the drug in through a large syringe.  All three of these took about 15 minutes total.  First was the "A" - Adriamycin, which is a deep red liquid that makes your pee bright orange!  Josh said I should take a picture, but I thought that would take it a bit too far :)  Next was "V" - Velblan, then "B" which is Bleomycin.  These two are clear liquids.

I didn't notice much of a bad taste when the Dexamethasone was going in, but as soon as the nurse started pushing in the other 3 drugs, I could taste it and stuck a Jolly Rancher in my mouth.  It wasn't a terrible taste, but it wasn't very good.  I think I'll try a Lemonhead next time - something a little stronger!  Because they injected me with so many fluids (combined with drinking a bunch of water), I peed 4 times while I was there!  Apparently I should get used to that....

Once all the drugs were in, they flushed out the port one last time (more icky taste in my mouth) and pulled out the needle.  You can see the spot where the needle went in here: 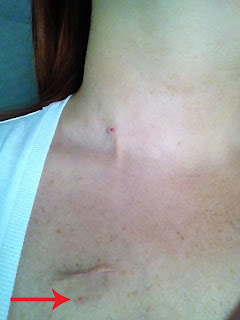 It's right around 7:00 p.m.  as I type this and I feel fine.  I have a headache as I mentioned, but otherwise good!  I ate lunch around 2:00 and just had a bowl of brown rice.  I'm trying to drink as much water as possible as that will help with the nausea.  The nurse recommended at least 64 ounces per day.  She also expected that I wouldn't sleep great tonight due to the steroids.  I already feel kind of antsy from that - it's kind of like that feeling when you just finished running... lots of adrenaline.  It's weird, but should only last until tomorrow.

I'll post an update tomorrow and let you know how I'm feeling then.  One last picture - I have hung all the nice cards I've received on a door in my house.  I read through those cards often and you are the ones who keep me going.  So thank you again to all who have given such amazing support. 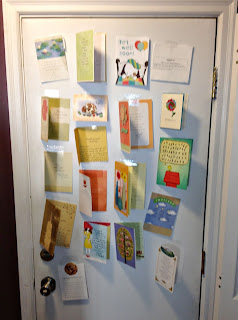 P.S.  Feel free to ask questions if you have them!  I'm more than happy to share!
Posted by Melissa